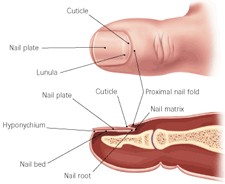 Also known as Onychomycosis or tinea unguium, nail fungus refers to a fungal infection of the nail and are one of the most common diseases associated with your nails.

Nail fungus occurs mostly in toenails, but it doesn’t mean that fingernails are free from the infection.

Nail fungus infections are usually caused by small separations between the nail and nail bed which allows pathogens to enter. Excessive hand washing, or having your hands in water a lot creates a suitably warm and moist environment that allow the fungi to grow.

Thickened, brittle, crumbly, ragged, distorted, dull, and darker or yellowish nails are signs that the nail has been infected with fungus. Infected nails may also separate from the nail bed in some cases. Nail fungus can result in pain in the toes or fingertips of the infected region. They might even emit a foul odor.

Fungus growth underneath the nail can lift the nail up off its bed. To treat this, you have to soak the infected nail for half an hour in warm water. After that, trim the nail using a nail clipper. Never try tearing off toenails with your fingers, as you may worsen the

condition. You will also notice that your nail is no longer attached to your toe in the places where the fungus had been growing beneath the nail. Do not worry as this is normal. All that’s left to do is to cut away all of the unattached nail and scrape off the thick, flaky fungus material. Try to remove as much of the fungus as possible. Push the cuticles back. It is important to be consistent in your care from this point onwards.

If you have nail fungus on your toe nails, you must allow air to reach the infected toe as much as possible. Moist socks and shoes often allow fungus to thrive. Try being barefooted as much as you can. Wear sandals or slippers whenever you can. Do not wear your socks more than one day. Socks that can be bleached would be even better.

Soak the infected nail in a weak solution of water and vinegar for at least 30 minutes on a daily. The fungus will not be able to survive in the lowered pH level of the nail. You need to do this every night, for a few months.

If nail fungus persists or worsens, do not hesitate to get immediate help from your doctor.