Epiglottitis is explained in this video

Find out more about St Mark James Training Locations and learn more about this article.

Epiglottitis is characterized by the abrupt swelling of the epiglottis. The epiglottis is refers to a flap of tissue which is situated right above the windpipe, also called trachea. The epiglottis plays a role in covering the top of the trachea while we eat, in order to allow food to go down the esophagus, thereby, preventing it from going to the lungs. 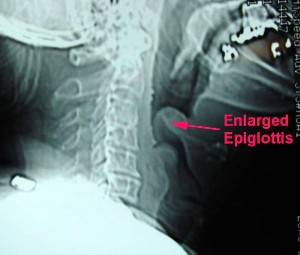 Epiglottis is rare but it is also a potentially-life threatening condition. it occurs and worsens rapidly, at times within hours. If not treated promptly, it can become large enough to block the trachea, thus making it difficult to breathe. Eventually the condition results in death if not treated on time.

Epiglottis is an infection that can occur at any age. Until the year of 985, the infection was most common in children of ages 3 to 7. However, then a vaccine was created to combat Haemophilus influenzae type b (Hib), therefore, causing the infection to be rare in children who are vaccinated.

Common signs and symptoms of epiglottitis include the following:

When to seek medical attention

Despite the condition, if a person experiences sudden difficulty in breathing you must call 911 or a local emergency number immediately for emergency medical treatment, especially if signs and symptoms occur along with other problems such as fever, sore throat or noisy/loud breathing.

You can prevent epiglottitis in children by getting them vaccinated against Hib and also pneumococcal infections.

If a person suffers from epiglottitis emergency medical attention must be sought immediately because the condition can lead to death if not treated in a timely manner. It needs to be treated in the hospital in order to monitor the person’s breathing. In case of having difficulty breathing due to this condition, the casualty will be required to breathe in through a breathing tube inserted in the person’s throat.

An antibiotic treatment must be started promptly after the breathing has been regulated and sampled of blood and throat swabs have been taken from the patient. They are usually given via an intravenous pipe, which takes the antibiotics into his or her vein.

When the infection is under control, antibiotics are prescribed to be taken by mouth until the whole treatment has finished. Additional medications are given to treat pain and fever.

With prompt and proper treatment, patients recover completely. Therefore, a patient must be diagnosed for symptoms at an early stage and treated before complications result.